176 cm
Yamada (山田, やまだ?), full name Yamada Taiki (山田大樹, やまだ たいき?), is the main antagonist of Downtown Nekketsu Monogatari. He attended the same middle school as his childhood friends Kunio and Hasebe. He and Hasebe would later attend Reihō Academy, while Kunio entered Nekketsu High. He used to be the Student Council President of Reihou Academy before Mamoru Tōdō took the position and he currently plays the role of his sidekick. After his defeat, Yamada transfers to Meian High School.

Yamada debuts in Downtown Nekketsu Monogatari as the game's final boss. He is the mentioned former childhood friend of Kunio in the game's intro text and known as a very shy and timid boy in the past. His reason for antagonizing Kunio is to prove himself the superior delinquet out of jealously of his former friend's badass reputation and to rename the franchise to Nekketsu Kōha Yamada-kun. He boasts that he possesses evil power, which became a running gag in the series (until the release of Rival Showdown, where he actually displays them).

After his defeat at the hands of Kunio, everything returns to normal at Reihō Academy. Everyone even forgets about Yamada.

When fought in the Famicom version, Yamada is equipped with a lead pipe. Although his stats are higher than the Double Dragon twins, he is on his own and has no special moves, which makes him an easier opponent. If players fight him on Difficult, his health goes higher than 128. Due to a bug, the player is able to defeat him even faster.

In River City Ransom (the localization of Downtown Nekketsu Monogatari), Yamada is renamed Slick and is revealed to be an old friend of Alex (Kunio in the original game) named Simon. Slick re-appears in the game's sequel, River City Ransom: Underground.

Yamada makes an appearance in the game's ending. After his defeat in the previous game, he transferred to Meian High School.

In this game, Yamada acts as a flunkey to Tōdō, just like in Downtown Nekketsu Kōshinkyoku.

He also appears in the localization of the game, Crash 'n the Boys: Street Challenge. He acts as the Vice Captain of Lincoln High School (replacing Ryūji from the original game) and is named Winston "Skip" Hildegard Jr.. He still acts as an underling of Tōdō (now known as Todd, also playable as the captain of Washington High School and replacing Riki).

In this version of the game, if players arrive to the final showdown with any of the Shitennō fighting on their side, Yamada will instantly kill them if he is allowed to finish his opening speech. If the player comes with teammates that are not the Shitennō, Yamada will complain that this was supposed to be a battle between just them, and summons Ryūji, Ryūichi, and Onizuka as reinforcements. Both of these can be avoided by attacking him before he finishes his speech.

In River City Ransom: Underground, Slick was imprisoned in River City Prison after the events of the original game. He now wears an orange prison jumpsuit and has a new technique in which he turns his arm into a mass of flesh. This is a nod to the character Tetsuo from the manga Akira.

Yamada is the boss in Crosstown, which Misuzu referred to as the "weird guy" that Kunio and Riki were talking to prior to getting kidnapped. Godai's tip traced him to the shopping mall, but he was later found in the construction site's rooftop as per Hiroshi's account. 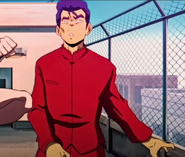 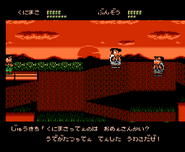 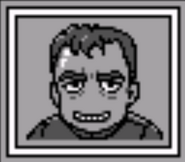 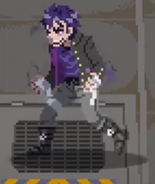 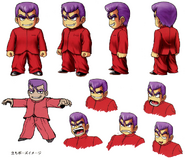