Shinji (しんじ?) is one of the original boss characters from Nekketsu Kōha Kunio-kun. He is the leader of a bōsōzoku gang known as "Yokohama Funky". He is known as the "Blue Emperor". In some games (such as Shin Nekketsu Kōha: Kunio-tachi no Banka and River City: Tokyo Rumble, the gang is named the "The Blue Emperors".

Shinji first debuted in the original Nekketsu Kōha Kunio-kun as the second boss of round 2 along with his bōsōzoku gang.

Shinji makes an appearance in the game as one of the main antagonists and a boss. Shinji takes over an amusement park along with some other gang members.

He is one of the unlockable players in the game. According to his in-game bio, he was Riki's Soccer Club Senior in middle school. After his stint as a badass, he changed his ways and dropped out of high school. He currently works at a factory in his hometown.

He makes an appearance in this game as the former leader of his biker gang. Currently, he works as a store clerk at Attire Fire in Downtown.

Sometime prior to the events of River City Girls, he once crossed paths with Misako and Kyōko, and lost a fight to them, and is not exactly eager in seeing them again (which explains his rude disposition whenever the two enter/exit his store or buy items from him).

Shinji debuted in chapter 8 of the series, along with his companions.

Shinji in Super Dodge Ball for the Neo Geo. 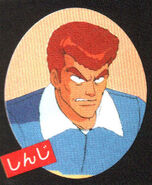 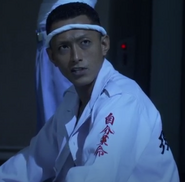