Sabu (さぶ?) is one of the main antagonists in the Kunio-kun series. He is the ruthless and lethal leader of the yakuza crime organization known as the "Sanwakai" (三和会?, lit. "Sanwa Gang") and is the final boss in Nekketsu Kōha Kunio-kun and some of its sequels. Unlike Kunio's other adversaries, Sabu relies on a semi-automatic handgun instead of using his fists.

Sabu and his knife-armed henchmen attacked Hiroshi outside the school. After running away back to their headquarters chased by Kunio. They battled and ended with Kunio's victory. In the NES version, he instead battled against Kunio alone inside a room.

Sabu returns in Shin Nekketsu Kōha: Kunio-tachi no Banka as the main antagonist and final boss, where he hires a Kunio look-alike named Ken to frame him for a hit and run accident.

Sabu's first appearance as a playable character is in Super Dodge Ball for the Neo Geo. In this game, he is voiced by Yukimasa Kishino.

As a reboot and remake of the original arcade and Famicom game, this game re-imagines Sabu's first encounter with Kunio. Hiroshi's father is against the construction of a casino, which is the reason for Sabu to antagonize Hiroshi. After he is defeated by Kunio, Sabu agrees to keep his hands off of Tokyo.

Sabu is revealed to be behind the "Tokyo Lion Alliance"'s attempt of conquering Tokyo, which he orchestrated to avenge his previous loss against Kunio. He achieves this with the help of his older biological brother, Lee.

A picture of Sabu is seen in the chamber where the fight with his daughter, Sabuko, takes place. Sabuko mentions that she is in charge of the Sanwakai while Sabu is indisposed.

In the picture, Sabu is holding a white dog. In River City Ransom: Underground, Merv had a similar appearance to Sabu and the only reason he antagonized the Flock was because he thought they had kidnapped his dog. 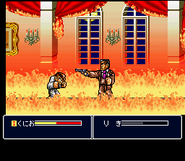 Kunio vs. Sabu in Shin Nekketsu Kōha: Kunio-tachi no Banka.