Raphael (ラファエル, Rafaeru?) is an African-American student of Oklahoma High School. He debuted in Bikkuri Nekketsu Shin Kiroku! Harukanaru Kin Medal, were he was the vice-captain of the aforementioned team, which is only controlled by the CPU. Raphael has the highest strength, HP and defense stats in the game, though he is slower then Johnny. Like his best friend Johnny, he makes reoccurring appearances throughout the series.

In Crash 'n the Boys: Street Challenge, two characters, Troy Noise Jackson from Southside High and Arthur Artie Van Smythe from Lincoln High use his likeness (they replace Hayato Ichijo from Nekketsu High School and Ryūichi Hattori from Reihou Academy, respectively). Raphael is renamed Crusher and is given Riki's face. This is referenced in River City: Tokyo Rumble, where Raphael appears alongside with Johnny, but is renamed Crush (likewise, Johnny is renamed Rocky). 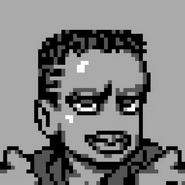