Onizuka's debut game, he is the first boss found inside of Reihō Academy.

Onizuka has this strange aura about him that reeks of evil, but in truth he and his scary face hides a gentle and genuinely caring personality. He takes great pride in keeping with sports conduct and berates at anyone who forgets to take off the shoes before entering the gym.

Onizuka makes an appearance in this game, this time as a clerk for Pay Lots, a convenience store located in Downtown. True to his description; he has an imposing look, but he speaks in a gentle, monotonic voice. 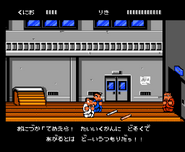 Kunio and Riki about to fight Onizuka in Downtown Nekketsu Monogatari. 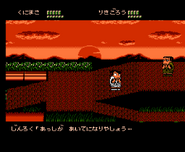 Onizuka in the role of Jinroku in Downtown Special. 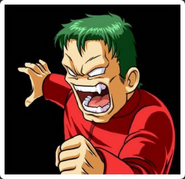 Otis in the school yearbook of River City Ransom: Underground.