Nishimura's first appearance in the Kunio-kun franchise is in Downtown Nekketsu Monogatari. He acts as the first mandatory boss in the Famicom version of the game.

Nishimura and Sawaguchi join a team led by Gōda, the School Union Team.

Nishimura once again makes an appearance as part of the School Union team.

Nishimura is the second boss in the game.

Nishimura appears as a playable character in the All-Stars team.

Nishimura is actually split into two characters in this game.

One referred to as just "Naritaka" is depicted as a spunky, precocious junior high student (sans glasses) who idolizes Riki and hopes to become as strong as him. To this end, he hangs out at the Downtown slums for "training". At the moment, he is unable to effectively fight back against his opponents, but insists that this is part of his training when Kyōko and Misako worry about him for looking all beat-up.

The one with Nishimura's original likeness on the other hand is found in a shop near the Downtown subway tunnel, selling books that prevent weapons of a specific class from breaking when the right one is held.[1]. 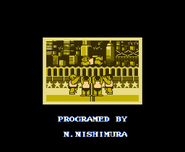 Programmer Naritaka Nishimura, the origin of the character's name. 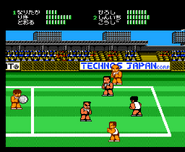 Naritaka (holding the ball), a member of the Hanazono High School Dodgeball Club, possibly named after the programmer. 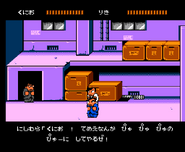 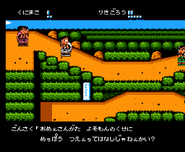 Nishimura in the role of Gonsaku in the Downtown Special period drama.

Naritaka with Nishimura's face in Nekketsu Kōkō Dodgeball Bu (Re). Tōru can also be seen in this screenshot with Maeda's face.

Rocko in the school yearbook of River City Ransom: Underground 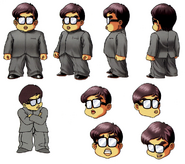