Nekketsu Kōha Kunio-kun: Bangai Rantō Hen (熱血硬派くにおくん 番外乱闘編?, lit. "Hot-Blooded Tough Guy Kunio: The Further Brawls") is the first game in the Kunio-kun series released by Technōs Japan for the Game Boy. It is a sequel to Nekketsu Kōha Kunio-kun, but uses the graphical style of Downtown Nekketsu Monogatari, which was previously released on the Famicom. This is the second game in the Kunio-kun series that has Kunio and Riki joining forces against a common threat, which would become a standard in later games. The game was released on western markets by Acclaim as Double Dragon II (Technōs originally planned to publish the game themselves, which they were planning to name The Renegades[1]). The game was released for the Nintendo 3DS Virtual Console on August 8, 2012 in Japan.

The game actually started as renegade title, before Kunio was brought in according to Koji Ogata. [2]

Players assume the role of Kunio, who must avenge the beating of his friend Hiroshi at the hands of Yūji Munakata, the only son of the chairman of Munakata Industries. Yūji has also been terrorizing Hanazono High School, so Riki joins Kunio as well, provided that another player has another copy of the game and the Game Link Cable. Though the game was released after Downtown Nekketsu Monogatari and uses similar graphics, they game doesn't give the player an option to choose between Kunio or Riki (the first player always controls Kunio and he is the only playable character in a single player game, only the second player can use Riki, though both characters play the same).

Other than punching and kicking, Kunio and Riki have an assortment of moves with which they can beat up their enemies:

Various enemies are armed, but the player cannot knock off their weapons and use them like in Downtown Nekketsu Monogatari.

The game has three rounds split into ten stages. In the first two stages, Kunio and Riki will first fight in the streets near Nekketsu High School and a shopping district, respectively. They will face a boss in this area. They then go to a train station, fight inside the train then fight on the trains platform, where they will face another boss. Entering each new area will restore Kunio and Riki's health, except in the final level.

The final round is first played on the streets in front of Munakata Industries, then player enters and fights in the first floor. On the third floor, Kunio and Riki have to fight the previous bosses again. They will find Yūji on his own on the top floor for the final battle.

The game has three difficulty levels: Easy, Normal and Difficult. Difficulty determines how much health enemies have, but they can only play the first level on Easy difficulty (the ending is the same on Normal and Difficult). The player has a total of three lives and cannot gain any more. If the player loses all their lives, the game is over. They can continue a one or two player game at any time, but they will start at the beginning of the current stage (if the player gets a Game Over in the first train station for example, they will begin at the entrance of Nekketsu High School, from the very start).

The player character in single player mode and the character used by the first player in two player mode. The guardian of Nekketsu High School, who learns that his friend Hiroshi got beaten by Yūji. He decides to barge into Munakata Industries and force Yūji to apologize to Hiroshi.

The second player character, the banchō of Hanazono High School who has had enough of Yūji antagonizing his school. He joins Kunio to put a stop to Yūji's reign of terror.

The honor student of Nekketsu High School and Kunio's best friend. He tried to stop Yūji from running off with fellow classmate Mihoko, which promptly got him a savage beating. His recovery in the hospital will take three months, which drives Kunio into going after Yūji.

A Nekketsu High School student whom Yūji fell in love at first sight. He tried to take her by force and was stopped by Hiroshi.

The game only has four normal enemies, two who fight barehanded and two that fight using weapons. The bosses at the train station will become normal enemies in the stages after their initial appearance. They have no official names, so the names listed below are tentative.

Acclaim published the game for the western market as Double Dragon II. Graphical changes were made to the game and the bosses were also completely changed. Kazuo Sawa, who had no involvement with the Japanese version, was brought in to compose new tracks for the game. Originally, American Technōs planned to publish the game as The Renegades. Remnants of the plot from The Renegades remain in Double Dragon II.

Despite having a very similar name, the localized Game Boy Double Dragon II has absolutely no connection, neither aesthetically nor plot-wise, to the original arcade game Double Dragon II: The Revenge or to its NES port. 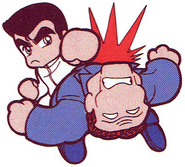 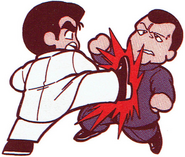 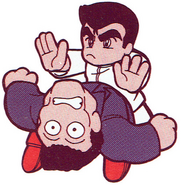 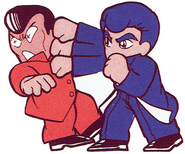 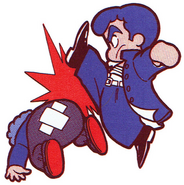 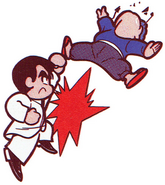 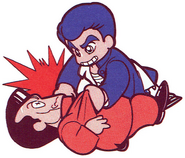 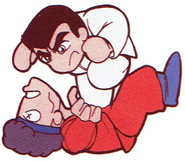