Nekketsu Fighting Legend[1] (熱血格闘伝説, Nekketsu Kakutō Densetsu?) is a tournament-style fighting game for the Famicom, both developed and published by Technōs Japan released on December 23, 1992. It has sometimes been referred to as Riki Kunio in English; as in one unofficial translation, but since the title is vague and could refer to any number of Kunio games, most Western fans call it by its original Japanese name.

The game was developed by the Niigata studio at Technōs Japan, who were professional wrestling fans. The game was made during the Tiger Mask era of the late Mitsuharu Misawa. The staff would watch and cheer at wrestling shows during the time of the game's development. The staff even got to experience Tiger Jeet Singh rampaging outside of the ring, which scared Koji Kai. Giant Baba is a local hero from Niigata, which is why the staff is filled with pro-wrestling fans. The Double Tiger brothers in the game are modeled after Misawa's incarnation of Tiger Mask.[2]

At the time of the game's development, fighting games were the most popular genre, both on arcades and in the console market. The staff developed the game while also playing other fighting games, but they also wanted to preserve the graphical style used in previous Kunio-kun games.[3]

One day at school, Kunio was minding his own business when suddenly, he found a note on his locker. The note says their is a fighting tournament hosted by the Saber Tiger association. Seeing it as a challenge he could not refuse, Kunio runs off to participate. When Riki sees Kunio running and reads his note, he decides to enter as well. Many other fighters will join in to see who is the strongest.

The game is a tournament fighter that focuses on 4 players in an arena. Depending on the selected mode in the game, players fight in either free-for-all or 2-on-2 battles. While all combatants can kick and punch their opponents, each of them have their own abilities, moves, and stats. Some arenas in the game have hazards that players need to pay attention to or risk losing additional health. Whenever a player is knocked out of a match, they will leave behind an item that other surviving players can pick up that can help or hinder them.The last person (or people in 2 vs. 2 fights) standing wins the match alone or for the team.

Besides defeating opponents, one of five extra rules may be set on matches:

Story Mode focuses on eight teams of two fighters to determine the strongest team in the tournament. There are 19 battles that must be fought. In order to face the Double Tiger brothers, at least 15 battles must be won; otherwise the game will end. In Story Mode, there is a stat that focuses on the teamwork between the player and their partner, which increases over time. The stronger that teamwork stat becomes, the more potent the team combo attack will become and the more likely it will track nearby opponents. If a player attacks their own teammate, however, the stat will decrease.

Battle Mode puts up to 4 players in a free-for-all fight and the winner is the last one standing. The rules can be changed in this mode and players can put their custom characters in the matches with passwords.

There are 16 playable characters that have their own stats and are separated into four classes (18 characters and five types counting the bosses): Kakutōka ("Fighter"), Martial Arts, Kung Fu, and Judoka. Each class has their own strengths and weaknesses. Fighters are well-rounded and use wrestling moves, martial artists are specialized in punching, Kung Fu fighters specialize in kicking, and Judokas are specialized in throwing.

The player can also create an original character whose type, stats and techniques depend of the name, birthday, and blood type. The original character and the 16 fixed characters can also level up in the Story Mode to become stronger, the progress being saved with passwords. The Double Tiger brothers are available as secret characters in the Battle Mode, and each has seven techniques available: Both have Mach Punch, Mach Kick, Mach Fumifumi (roughly "Mach Stomp"), Spin Attack, and Stone Guard, Toraichi has Bakuretsu Kick ("Burst Kick") and Jump Elbow, and Toraji has Jump Guillotine and Tornado Attack.

*All stats are of level 1 characters.

Nekketsu Kakutō Densetsu was released for i-mode and EZweb between 2003-2004. Those versions included a number of changes and new content such as new characters, new classes (Ninja and Bōsōzoku), new stages, and a survival mode, but also removed some content from the original, like the Martial Arts type and characters (except Riki, which changed to Kung Fu type), cutscenes, and items.[4] Characters could also be transfered to the mobile-only game "Nekketsu Kenka Ichi Kettei-sen" (熱血喧嘩一決定戦, roughly "Hot-Blooded Clamour Decisive Battle").[5][6]

Although originally for the NES, in the 2010s Kakutou Densetsu has gained popularity in the form of a fan remake on PC. Though its structure is akin to the original, the PC's greater power means the remake is devoid of the slowdown and flicker that sometimes plagued the original; in fact, if a player has been defeated and a round is left to AI, the action can be sped up by many orders. The PC version also supports up to eight fighters at a time.

The plot is mostly the same, but players who score high enough in the PC version's story mode will fight Misuzu instead of the Saber Tiger brothers.

Perhaps the greatest source of the PC version's popularity is its support of mods. Though the core game is a closed program, a great deal of its assets, such as characters, stages, and sounds, are controlled via folders of editable images and text documents. Being written in Japanese can be a problem to users whose computers aren't configured to support it, but with ample documentation it is possible to adjust stats, add new characters, change how characters dress, and more. 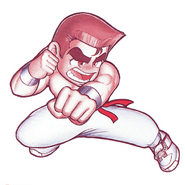 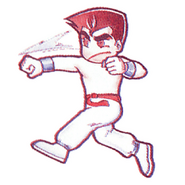 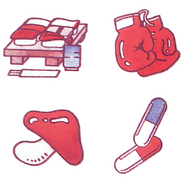 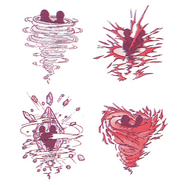