He has a younger brother named Mochizuki Tsukasa, who appears in Downtown Nekketsu Baseball Monogatari: Yakyū de Shōbu da! Kunio-kun as a member of the Hattori Academy team. Hayasaka, another student from the academy, is his best friend.

Mochizuki's first appearance is in Downtown Nekketsu Monogatari as one of the game's bosses.

In the localized version, his nickname (かっとびのもつ Kattobi no Motsu) is translated to "Greased Lighting". 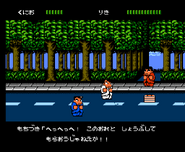 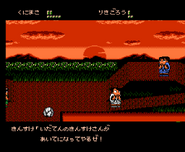 Mochizuki playing the role of Kinsuke in the period drama of Downtown Special.
Add a photo to this gallery
Retrieved from "https://kuniokun.fandom.com/wiki/Mochizuki?oldid=9955"
Community content is available under CC-BY-SA unless otherwise noted.