Misuzu (みすず?) is a giant sukeban ("female gangster") and a third year student from Taiyō Academy. Most information about her is shrouded in mystery. Her titles include Monster Giant (怪力巨女, Kairiki Kyoon'na?) and Monster Maiden (怪物乙女, Kaibutsu Otome?).

Misuzu is generally depicted as being somewhat outside the law, but she doesn't seem to hold any grudge against Kunio and allies with him on occasion. Misuzu has never lost a fight, except against Kunio, even though she surpasses him in strength. The two mostly stay in touch to compete against one another. She is generally rather jolly but has an easily triggered temper. In spite of her size and strength, Misuzu wants men to find her attractive, and tends to become enraged if anyone even debatably implies that she's not.

Misuzu debuts in Nekketsu Kōha Kunio-kun as the boss of Round 3 and is the toughest boss in the game.

In the Famicom/NES version of the game, it is possible to skip the boss fight with Misuzu entirely, but the player will run into her in the final level while trying to reach Sabu.

She returns in Shin Nekketsu Kōha: Kunio-tachi no Banka, along with Shinji and Sabu. Kunio and friends first encounter her at a pachinko hall where she was playing. After losing her money from playing, she decided to fight them since she felt irritated and wanted to let off some steam. After she was defeated, she left the scene with contentment much to the bewilderment of the heroes. She later appears at Sabu's villa after Sabu hires her as bodyguard and fights Kunio and Riki once more. After yet another defeat, she warns them about the self-destruct system in the villa.

Super Dodge Ball for the Neo Geo marks Misuzu's first appearance as a playable character. She is one of the characters that can be selected as captain and is considered to be a speed type character. Her Power Shots are "Hyakkan Love" (she charges at her target with the ball on her chest) and "Sexy in the Sky" (she throws the ball in the air and spikes it downward at her target with her chest). Her Super Shot is the "Dynamtie Hip" (her teammates propel her while she is standing on the ball, planning to hit her target hip first). Her initial teammates are Gonzou and Kiyoshi.

Misuzu is voiced by Keiko Yamamoto.

Her team is available as downloadable content, but the Steam version and digital version released for the PS3 in Western territories has her team unlocked from the start.

Misuzu and her team from the last game are back, and now have a role in story mode.

There are two instances of Misuzu in this game. One of the River City High School teachers is named Mrs. Kim, the same name Misuzu had in Renegade, though she has the exact same design as Misuzu. The other Misuzu is found in the Ocean Heights dojo and is named Suzu. Misuzu also appears at the end, where she kidnaps Abobo, parodying the opening scene of the original Double Dragon.

In River City Girls, Misuzu is the head of the River City High Defence Force despite being from another school, serving as the last obstacle against students trying to escape detention. Though made fun of for her questionable penchant of punching through walls instead of using doors, she claims to be smarter than everyone since she has attended high school for seven years.

After being defeated by Kyōko and Misako, Misuzu sends them off with a parting shot that Kunio prefers girls with more meat as opposed to shrimps like them, also asking the two to give Kunio her regards. 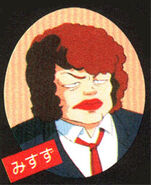