Kyōko (きょうこ?) is a sophomore student of Hanazono High School and Riki's girlfriend. Her introduction to the Kunio-kun franchise was in Shin Nekketsu Kōha: Kunio-tachi no Banka, where she was one of the four main playable characters. A beautiful girl with a ponytail and a blue blazer, she is fully loyal to Riki and is his type of girl. Although younger than Riki, she keeps him on a tight leash with her firecracker personality. She is close friends with Misako of Nekketsu High School.

Kyōko's debut appearance in the Kunio-kun franchise. She is waiting for Riki on the roof of Hanazono High School with Ryūta, who is holding her captive. Once Riki arrives, she stands aside so that he can beat the crap out of Ryūta. After his defeat, he reveals that Shinji was the one who ordered him to take control of Hanazono High School. Learning of this, Kyōko wishes to accompany Riki, Kunio and Misako to the amusement park where he is located to take revenge for forcing the Hanazono students to work for him.

Later in the story, she and Misako were both woundedly shot by Sabu, rendering them unplayable for the latter part of the game. They are taken to the hospital by Takayama, who later reveals to Kunio and Riki that both girls were out of harm's way after prevailing against the Sanwakai boss.

Kyōko, like Misako, moves and runs faster than both Kunio and Riki. She cannot be grabbed by enemies, but she cannot grab or sit on enemies. Her special techniques are the Mach Kick, the Screw Slap, and the Spinning Chop.

Kyōko makes a brief appearance in the game's Story Mode when Kunio first meets Riki in Shinjuku, warning Riki not to start a fight with Kunio and getting hurt. On the player's first run of the Story Mode, this is her only appearance, though she is later mentioned by Misako.

When player's start the Story Mode using clear save data, when Misako mentions Kyōko to Kunio and Riki before they head to Yokohama, Kyōko will appear to see Riki off. From this point on, the player may speak to Kyōko in front of Nekketsu High School to switch Kunio with either Riki, Shinji or Misuzu.

This game marks Kyōko's second appearance in the Kunio-kun franchise, 19 years after the release of Shin Nekketsu Kōha: Kunio-tachi no Banka. She is Riki's girlfriend, just like in that game. In this game, Kyōko is dressed in a sailor outfit school uniform (much like Misako in Nekketsu Kōkō Dodgeball Bu: Soccer Hen) instead of having a blue blazer.

Kyōko (in her Kunio-tachi no Banka design) is a member of the downloadable content team led by Misuzu, Team Misuzu. She starts events already equipped with a chain whip, just like Kumiko. The weapon never appears in the game and can only be used by taking it from either character. Kyōko is the fastest character in the team and one of the best choices for the Cross Country event. However, her Strength is low, making it difficult for her to compete with fast characters who are stronger.

In Battle Royal, due to her high Agility and the Mach Kick, the player is able to carefully attack any openings when opponents make a mistake. If they can connect a jumping kick they can follow up with a Tornado Punch.

Team Misuzu is unlocked from the start in the Steam version and the digital version released for the PS3 in the West.

Kyōko can only perform the Mach Kick in Camphor Ball and Battle Royal.

Kyōko returns in Battle Royal Special as part of Team Misuzu and is involved in the game's Story Mode (Single Play).

Kyōko no longer has the Mach Kick and is instead given the Mach FumiFumi. This allows her to combo her flying kick into the Tornado Punch easier. Kyōko is meant to be used to increase the player's score by taking advantage of Mach FumiFumi. However, due to her low Strength, player's need to be wary of not standing around and overdoing it, lest they are defeated quickly.

Kyoko is one of the main characters of River City Girls. Cute, cheerful and bubbly, Kyoko is Misako's friend for life and Riki's girlfriend. She is voiced by Kira Buckland.

Kyōko returns as part of Team Misuzu in the game. Her stats are slightly increased, and her moveset has been completely changed. She now has her original Screw Slap from Kunio-tachi no Banka (the move is exclusive to her), and the original version of the Mach Kick.

Kyōko along with Kunio, Riki and Misako in artwork from the Shin Nekketsu Kōha: Kunio-tachi no Banka manual. 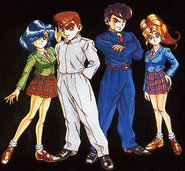 Kyōko along with Kunio, Riki and Misako in artwork from the Shin Nekketsu Kōha: Kunio-tachi no Banka manual. 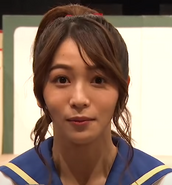