The Shitennō (The Zombies in River City Ransom)

Kobayashi (小林, こばやし?), full name Kobayashi Masao (小林政男, こばやし まさお?), is a third year student at Reihō Academy and the leader of the Shitennō (四天王?, "Four Heavenly Kings"), a group of some of the most feared fighters in the academy.

Kobayashi is the strongest member of the Reihō Shitennō, and has the power, fighting prowess and confidence to rule over the academy, but chooses not to. Although he comes from an upper-class background, he is currently living in poverty due his father's mismanagement of his business venture. The harsh life that Kobayashi faced since that time changed him. Though he acts calm and polite, Kobayashi is harsh, nihilistic and has a twisted mind.

Kobayashi debuts in this game as a boss. He will only appear in the final room of the Kobayashi Industrial Factory Site after Kinoshita, Mochizuki and Taira are defeated. Defeating him will allow Kunio and Riki to face Gōda at the Reihō Academy gates.

In River City Ransom and Street Gangs, Kobayashi is renamed Thor. He is described as the son of a rich local banker, a mean fighter and the leader of the Zombies (the Shitennō). No mention of Thor being connected to the Vacant 3rd Wheel Factory (the Kobayashi Industrial Factory Site) is made.

Kobayashi is a member of the Reihō Academy Team, and is described as a character comparable to the captains of other teams, since Ryūichi acts as the academy team's captain. His special move is the Mach Chop. The Mach Chop is the fastest of the Mach attacks in the game, as it has the least frames.

Kobayashi is the second character that can trigger the Weapon Throwing Bug in the game (the other is Morimoto).

Kobayashi plays the role of Heishichi, and is fought as a boss. His special move is the Hyper Guard. If Heishichi is attacked, he will block the attack and deflect the equivalent damage to his opponent.

Kobayashi returns as a member of the Reihō Academy team.

Kobayashi is one of the default characters that player's can use when creating their teams.

Kobayashi appears as a member of the Reihō Academy baseball team.

In this remake to the original Downtown Nekketsu Monogatari, Kobayashi has the Hyper Guard from Downtown Special: Kunio-kun no Jidaigeki and receives an all new move: the Glide Chop. Kobayashi is once again fought as a boss at the Kobayashi Industrial Factory site after the other members of the Shitennō are defeated.

It is possible to recruit Kobayashi in the game. However, the player requires a high amount of reputation, possibly the highest for any character. Players must not recruit any of the other members of the Shitennō as well. If Kobayashi is recruited and the player completes the game, the ending changes slightly by mentioning that shortly after Yamada left Reihō Academy, Kobayashi left the academy as well and nobody has heard from him.

In River City Ransom EX, Kobayashi is once again renamed to Thor and is the leader of the Zombies. 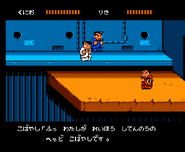 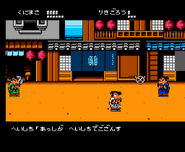 Kobayashi in Downtown Special, playing the role of Heishichi.

Add a photo to this gallery
Retrieved from "https://kuniokun.fandom.com/wiki/Kobayashi?oldid=10867"
Community content is available under CC-BY-SA unless otherwise noted.