Watching gangster movies
Hiroshi (ひろし?) is a fictional character in the Kunio-kun series. He is Kunio's best friend in the original Nekketsu Kōha Kunio-kun game. In the games he appears in, Kunio usually goes out of his way to ensure his safety whenever he's in danger.

Hiroshi admires Kunio because of his benevolence and strength. He rarely gets involved in fights, but tries to help Kunio and his other friends whenever he can by being an informant in his adventures.

He yearns to be a righteous, tough guy delinquent someday (just like Kunio).

In the arcade version of the game, he is beaten by different gangs, each led by Riki, Shinji, Misuzu and Sabu before the start of each stage, prompting Kunio to avenge him. After defeating Sabu at the end of the game, Kunio comes out of the building only to see Hiroshi and the other students of Nekketsu High School cheering for him on his victory. Kunio and Hiroshi then shake hands. In the Famicom version, he is kidnapped by Sabu, and Kunio must rescue him.

When Yūji Munakata sees Mihoko, a student from Nekketsu High School, he falls in love at first sight with her and attempts to take her by force. Hiroshi intercepts him and takes Mihoko away from him, prompting Yūji to send his men after him. Mihoko gets away, but Yūji's cronies eventually catch up to Hiroshi and proceed to physically assault him. He is hospitalized from the beating and his recovery will take three months. Angered at his beating, Kunio proceeds to head to Munataka Industries with Riki tagging along and they take revenge by beating Yūji, then dragging him to the hospital to apologize to the still recovering Hiroshi.

In the beginning of the game, he was first harassed by thugs in the Union who mistaken him for Sakuramiya student due to his white uniform, only to be rescued by Kunio. He wants to meet with a friend named Miho for an important discussion which involves schools in Osaka being taken over by the Osaka State Union. He tries to help her along with Kunio to fight them. Later on, Kunio and Hiroshi were ambushed by Nakazaki and his gang when they heard about the Alliance they formed. Hiroshi tried to fight back, but was injured gravely as a result.

Early in the game, Hiroshi has a discussion with Kunio and Riki about how the school has changed during their stint in jail. Later on, he meets the two after their prison break and runs along with them. When they evade from the police, Hiroshi was told to stick around outside of Nekketsu High School just in case something happens.

A reimagining of the original game, this version fleshes out the character of Hiroshi further and reveals the reason as to why the yakuza attack and kidnap him[1]. Hiroshi's father is a legislator who is against the construction of a casino.

After Kyōko and Misako get information from Godai that Yamada can be found inside the Mall, Hiroshi will appear near the entrance, patiently waiting for it to get unlocked so he can get in and buy the latest issue of his favorite comic book, "Cosmic Mega Babe".

Misako remembers Hiroshi from the time that she took his lunch money, but to him, it's all water under the bridge. Hiroshi then gives the girls details on how to open the door without breaking it: By taking the key from the security guard who was snoozing back at his home.

Upon gaining access to the mall, Hiroshi will be found reading the comic in the food court, quite disappointed that he wasn't able to get the special edition. He also hasn't seen Yamada around but surmises that the latter may be in the nearby construction site.

Hiroshi as seen in the arcade version of Nekketsu Kōha Kunio-kun. 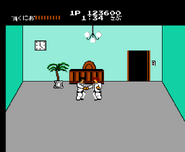 Kunio rescues Hiroshi from Sabu in the Famicom version of Nekketsu Kōha Kunio-kun. 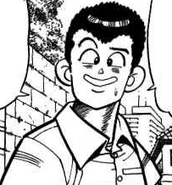