Heilman (へいるまん, Heiruman?) is the captain of the Iceland team in the Kunio-kun series. His first appearance was in Nekketsu Kōkō Dodgeball Bu, where he threw a dodgeball at Kunio during the opening sequence of the Japanese arcade version (although at this point, he had yet to be officially named).

In the arcade version, Heilman is an unnamed character and all enemy team captains, bar Riki, use his appearance. Heliman and other Captain's with his appearance is called "Ogres."

Heilman is finally named in the Famicom and PC Engine versions of the game. He is also a playable character in both.

In the NES version, the other captains are given unique appearance and only Heliman keeps the Ogre appearance.

Heliman is an unlockable playable character in the battle mode. He can throw any object like a dodgeball.

According to his bio, he wants to get out of Japan as soon as possible after the athletic meet because the humidity and heat causes him to be easily exhausted. He doesn't open up to people, including his teammates, because of his homesickness. 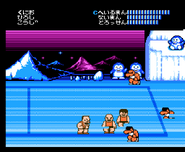 Heilman in the Famicom version of Nekketsu Kōkō Dodgeball Bu. 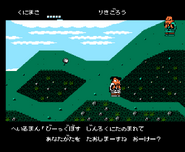