Hasebe (長谷部, はせべ?), full name Hasebe Kazumi (長谷部和美, はせべ かずみ?), is a senior year student of Reihō Academy and the heroine of the Downtown Nekketsu series, a sub-series of the Kunio-kun franchise. Hasebe is the Student Vice President of Reihō Academy. She is considered cute and reliable and is popular with students, but isn't afraid to get violent with those who cause trouble. She was once known nationwide as a "Legendary sukeban" feared throughout her school's district, and has many female friends from that previous life.

Hasebe attended the same middle school as her friends Yamada and Kunio[1]. Hasebe is always rooting for and supportive of Kunio, but dislikes Tōdō and Yamada due to their grudge against Kunio.

Her first appearance in the franchise is in Downtown Nekketsu Monogatari, where she warns Kunio and Riki about the Hattori Twins and where to find Mami.

Hasebe's debut in the franchise. It is explained in the past, she and Yamada were once close friends of Kunio back in middle school, but the two later went to Reihō academy and separated from Kunio. At Reihō academy, Yamada become student council president with Hasebe as his vice president.

When Yamada snapped due to his jealously of Kunio and used his evil power to kidnap Mami and organized a plan to unite all high school delinquents to take out Kunio and reign supreme, Hasebe cut ties with him and sought out Kunio.

If players are playing as Kunio (or he is the first player) Hasebe will warn him of the Dragon Twins and tell him to be careful. If she meets Riki instead, she will tell him that she owes a debt to Mami. Regardless of the character used, she will emphasize that although she is a Reihō Academy student and Yamada's Vice President, she supports Kunio.

In the game, Hasebe has the same face as the female school girls that appear as NPCs. The graphics for her face are in the game and go unused[2]. There is also an animation of Hasebe handing out a letter to someone and bowing nervously (rumored to be a confession letter to Kunio).

In this game, Hasebe acts as the master of ceremonies (MC) for the athletic meet sponsored by Tōdō.

Hasebe assumes the role of Okoto, the daughter of Bunzō. This is the only game in the series in which Hasebe acts as a damsel-in-distress.

Hasebe is featured in game's cover art, and makes a cameo in the game's intro.

Hasebe makes an appearance as the sports announcer.

Hasebe is one of the opponents in the game.

A remake of Downtown Nekketsu Kōshinkyoku: Soreyuke Daiundōkai, Hasebe is once again the MC. She appears in the game's Single Play (Story) Mode as part of the story line. A late cutscene establishes for the first time in the series that Hasebe is a highly formiddable fighter, though it would take a bit longer to play as her.

Downloadable content released for the game allowed players to use the Cheering Girls (Cheerleader in the localized version of the game) team, which is led by Hasebe, includes Kōzuki (Reihō's Director of the Broadcasting Division) and the cheer leaders of the default teams (Momozono, Shimada, Aihara and Kirishima). The team is unique in that they have three special techniques instead of two. Hasebe uses Mochizuki's Nitro Attack, Kobayashi's Mach Chop, and the Tornado Kick used by Tatsuichi and Tatsuji in Downtown Special: Kunio-kun no Jidaigeki da yo Zen'in Shūgō!.

This DLC marks the first playable appearance of Hasebe in an official Kunio-kun game.

In story mode, she reprises her role from Downtown Nekketsu Story, informing Kunio about Yamada's plot, but also has her lore expanded to reflect her time as a sukeban. In Double Dragon Duel mode, her River City Ransom counterpart Roxy is unlockable if the player scores enough points in one playthrough. As with all of the characters in this mode, she retains her localized name even in the Japanese version.

Hasebe returns as the captain of the Cheering Girls team and is involved in the game's story mode. She still has the Tornado Kick, but now also has the Dragon God Fist used by Ryūichi. She also has the Tetsuzankō (Body Check in Western versions of the game), a move unique to her (the one she used on Yamada, Tōdō and Michael Tobioka in ~All Stars Special~). Hasebe performs a body strike. If angered, Hasebe can perform up to three attacks with the move.

Unlike in Downtown Nekketsu Monogatari (River City Ransom), in River City Girls Hasebe and Mami are re-imagined as snobby, diva-esque 'popular girls', and there are minor hints that the two have a long-running unfriendly rivalry with Kyoko and Misako.

Hasebe appears as a secret final boss, along with Mami, if the player beats the game and destroyed all Sabu Statues. When fought, Hasebe can perform Misako's Stone Hands. The move has a longer range and homes in on her opponent, unlike Misako's version. Her use of the move is likely a reference to her trademark Tetsuzankō. 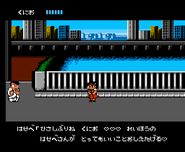 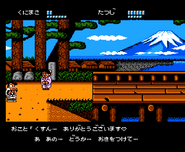 Hasebe playing the role of Okoto in Downtown Special. 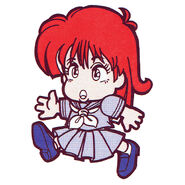 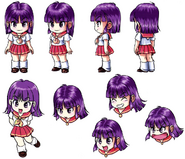 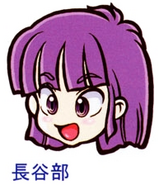