Not to be confused with Gōda.

Godai is described as a force to be reckoned with since he has the tendency to lose his temper. He also enjoys fighting and is known for his bōjutsu fighting skills. Godai is a close friend of Gōda, whose sense of justice he admires. In his artwork, he always sports a big smile with clenching teeth whereas his in-game sprites doesn't possibly due to sprite limitations. It's possible that Godai's constant, seemingly forced and strained smile is an attempt on his part to keep his volatile temper in check.

Godai is a recurring character in the Downtown Nekketsu series. His popularity both with fans and the staff led him to cross over to games outside of this series, mainly Ike Ike! Nekketsu Hockey Bu: Subette Koronde Dairantō and Nekketsu! Street Basket: Ganbare Dunk Heroes.

Godai's first appearance in the series. He acts as an optional boss in the Famicom version of the game, found in the second floor of Reihō Academy. He is equipped with a bokken (or bokutō, a wooden sword) which allows him to perform his trademark Bōjutsu Special.

Godai is introduced as a neighbor and childhood acquaintance to Kyōko and Misako, though the two are repulsed by his weirdness. Godai is also infamous for having been expelled from school due to taking stolen shots of the Girls' Volleyball Team, a fact that he neither confirms nor denies.

Nonetheless, he prides himself with being able to keep tabs on anything and anyone around River City, and offers his assistance to the two in exchange for doing him some favors, ranging from a burger fetch quest up to a beat down on yakuza traitors. Rewards are given in the form of EXP and money, some of which can be increased if the Pepper Spray obtained from River City High is equipped.

Given that Godai knew the contents of the message sent to the girls at the beginning of the game (without being told), it is highly likely he was the one who sent it in order to get them to do jobs for him. This was confirmed by WayForward.

After that first encounter in Crosstown, Godai will always emerge from one specific dumpster in subsequent areas and briefs the girls on what he needs done there. 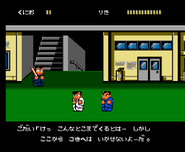 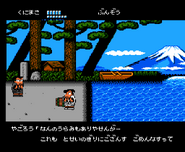 Godai in the role of Yagorō in Downtown Special.

Godai in the Ore wa Otoko Da! Kunio Kun manga.
Add a photo to this gallery
Retrieved from "https://kuniokun.fandom.com/wiki/Godai?oldid=11487"
Community content is available under CC-BY-SA unless otherwise noted.