Not to be confused with Godai.

Although he is said to be a fierce fighter, he has a kind heart and a sense of justice which Godai admires. Because of that, the two are good friends. Gōda is a very popular person because of his kindness. He is also very protective of his sister Saori.

The character's first appearance is in Downtown Nekketsu Monogatari, as a tough boss who is guarding the entry gates of Reihō Academy.

Gōda serves as the captain of the School Union team, which he organized so that he could participate. His signature move is the headbutt, like in his first appearance.

Gōda plays the role of Bunzō. He is Kunimasa, and falls ill under mysterious circumstances. Upon his recovery, he can be used as a playable character or as a computer-controlled assistant. He retains his headbutt attack from Downtown Nekketsu Monogatari.

Gōda again serves as the captain of the School Union team.

In Crash 'n the Boys: Street Challenge, Gōda is renamed Richard "Sprecks" Spreckles. He is the captain of the Jefferson High School team. 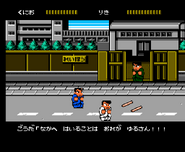 Kunio and Riki are confronted by Gōda in Downtown Nekketsu Story. 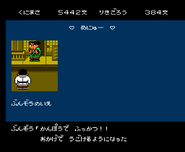 Gōda playing the role of Bunzō in the Downtown Special period drama. 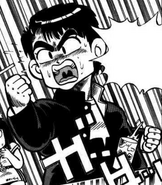